Management issues shall only be raised briefly here as the focus of the dissertation is the assessment process.

Management was nearly always delivered through the family. Families proved the greatest ally in management. Their usual wish was for their mentally ill relative to stay, and would go to great lengths to ensure that the patient did not need to be sent to Alice Springs. (This contrasts with my experience of white families where there may be a tendency to put pressure to admit the patient).

Thus the family will often monitor medicationtaking if compliance is a problem, sometimes being as effective as a Community Treatment Order. Occasionally even the tolerance of the family would be exhausted by very difficult or disturbed patients, and the family would make a decision that the patient needed to be taken away, involuntarily if necessary, to the psychiatry ward at Alice Springs Hospital. In deciding whether a patient needed admission or not I would be guided a lot more by the family’s wishes than in working in the Western setting where my clinical assessment of the patient would carry much more weight. If I thought the family were greatly underestimating the risks in deciding to keep the patient in the community, I would attempt to become involved in the discussion process to influence them in favour of admission especially if the risk was one of suicide. Violence and aggression seem to be tolerated a lot more in the remote Aboriginal communities than non-Aboriginal society. I was never in a position where I had to authorise an involuntary admission against the family’s wishes. Occasionally I approved admissions that were not clinically indicated when great family pressure was applied for admission.

In complicated family problems where the family are reasonably functional, management is best handled by: calling a family meeting, crystallising what the problems are and then asking the family to come up with a solution. This approach has been used successfully several times by the Barkly Mental Health Team (personal communication from Ms Sue Arkle and Ms Fiona Grant).

For example, a young Aboriginal woman was repeatedly self harming, she claims out of frustration at being treated without respect by her husband. Her husband and his elder wife (multiple marriages are still common), were much older than the patient, and treated her more as a daughter. After a family meeting, the family were told to come up with a solution. Their solution was to send the younger wife away to another community for her to find a younger husband. It may seem a harsh solution to Western eyes, but it worked and was accepted by all members of the family. The Barkly Mental Health Team had acted as the facilitator in this process. 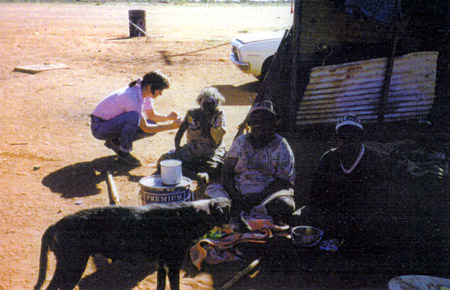 Families would have trouble understanding the negative symptoms of schizophrenia and this could result in the patient being chided for laziness and a high expressed emotion milieu could develop. Family psychoeducation was attempted in these cases but with mixed results because of the lack of resources to follow through with this. Sometimes respite is an option especially for the ‘humbugging’ chronic schizophrenic client, so that the patient can stay with other relatives in another community or Alice Springs for periods of time.

Storytelling was the best mode for psychoeducation, by putting scenarios in the third person, for example, ‘I know a woman in another community, who reminds me of you. She felt strong so she decided to stop getting her needle. But after a while the needle wore off and she got the voices again and had to go to hospital.’

Psychoeducation was also necessary with the use of medication. Often it was thought by patient and family that the medication could be stopped as soon as the symptoms abated. The concept of maintenance medication for a mental problem was poorly understood, until I compared it to diabetes (an illness well known to most Aboriginal families). In one case a patient was prescribed stelezine for auditory hallucinations and when I revisited him two months later the symptoms were in remission and the patient was very pleased with the effects of the medication. When I asked if he needed a new supply he declined this offer and said he carried the blue pills wherever he went and showed me an unopened plastic container of stelezine. He believed that merely carrying the pills around on his person would be enough to treat the psychosis. In his case, he was proved right.

Psychiatric emergencies are a difficult problem logistically in remote areas and I have been involved in up-dating the protocols for (a) Transport of potentially violent patients and (b) Psychiatric emergencies, for the new edition of the ‘CARPA Standard Treatment Manual’, a manual distributed throughout remote areas of Australia and used by clinic nurses and AHWs (see Appendix 7. Note the need to use simple non-jargon language). Air transport is the most safe and humane mode of transport as long as careful precautions are taken.

One of the hardest aspects of management was the fact that we were only able to visit communities once every two to four months. In some communities there were very serious cases of mental illness that ordinarily would have a member of a Crisis Team visiting daily. It would often be too much to ask clinic nurses or AHWs to perform the role of a Crisis Team, and it was hard to manage the cases over the phone. Sometimes on visiting a community we find that few of our recommendations had been implemented since our previous visit, for example proposed trial of medication have been aborted because ‘he didn’t like the tablets’. Now with an extra RMHN on board we hope to follow progress of cases more assertively. 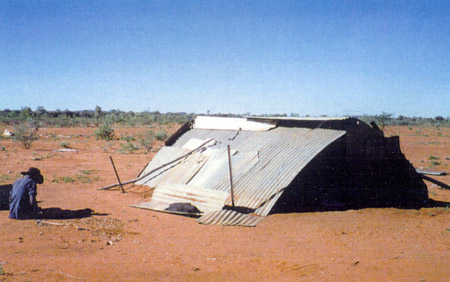