My early expectations were that the large cultural and language barriers would defeat any attempt at performing a meaningful psychiatric practice in remote Aboriginal communities. I was expecting lack of acceptance, indifference or even hostility toward an outsider. These prejudices of mine have evaporated like the once swollen creeks of the outback. Not only is it possible to practice psychiatry, but it is ultimately exhilarating for the clinician and appreciated by the communities. The key has been to become more flexible, tolerate doubt and the decreased sense of control by containing one’s obsessionality, to work much more closely with a wide variety of people and utilise the reciprocity of the professional relationships, to embark on a continual learning process about the cultures that one works in, adapting some of the skills I have gained from my training to allow them to be more culturally appropriate, while retaining others of these skills unaltered and to do away with any vestiges of omnipotence as there is no place for this professionally or personally in remote area work.

Psychiatry from its beginnings in the very restricted sub-cultural setting of 19th century middle class Vienna, has had to adapt itself to the enormous variety of cultures in which humans live. More than for any other area of medicine, how we illicit information, define disorders and go about managing them are greatly influenced by the cultural setting. It is somewhat surprising that there is comparatively little information on how to conduct psychiatric practice in the oldest surviving culture of all – that of the traditional Australian Aborigine. This dissertation has been an attempt to explore the new modes of working in a setting which is not only novel to me, but novel to my profession.

The most noteworthy differences were:

Working in the cross-cultural setting has not only taught me a lot about Aboriginal culture, but also about my own culture, through the opportunity of stepping outside to see my culture through someone else’s eyes. In writing this dissertation I have often fantasised about how my cross-cultural counterpart, the Ngungkari, would go about studying the spiritual problems of white communities. He could find it important to listen to the culturally accepted explanations for illness, for example, that unhappiness is caused by an imbalance of chemicals, but at the same time hope that the white person will be pragmatic enough to accept some spiritual help. He could urge his colleagues to refrain from value judgements on entering white communities where the local practices of land clearance, environmental degradation and overpopulation could threaten the objective neutrality of the Ngungkari, causing the Ngungkari to assume that the white-fella must be rama-rama. He would be baffled at the white-fella’s insistence of excluding the family at interviews and lament at how unsettling it was to change his work practices to see people in one-to-one interviews and how strange the white-fella’s taboo of not being able to talk to the family about his problems.

As a beneficiary of the white colonisation of Australia, I can see the many motivations of myself and other staff working in the remote Aboriginal communities. There are strong moral and philosophical ground for bringing services to the communities, to nurture the communities for they are islands where traditional life can persist and provide refuge to some extent from the relentless damage wrought by acculturation. Even for Aboriginal people living in the urban environment it must be important for a sense of self to know that there are people living on their homelands with their language and culture intact. For the white clinician there is a sense of being able to feel a redressing of the process of acculturation, that one can make a service conform to the needs of the Aboriginal people rather than the other way around. Psychiatry, of all specialities, has this role to play as (i) it is a highly mobile speciality with little infrastructure needed so that it can travel to the communities and administer treatment; (ii) mental health issues are intimately connected to the longterm well being of the communities, for example low self esteem from boredom and loss of role, substance abuse; (iii) there is a crying need for psychological support of the remote clinic staff, probably using the liaison psychiatry model (my interactions with the staff reminded me very much of my work in liaison psychiatry).

It is interesting that so far, the problems of acculturation and its consequences have not been referred to us as much as would be expected. There is a lot of emotional distress and mental suffering in the communities (for example, petrol sniffing, the large somatising population, the chronically unhappy but non-psychotic people) which rarely gets referred. In more urbanised Aboriginal settings the trauma and grief related disorders get referred but the psychotic disorders are seldom referred. I believe that mental health services can play more of a role with these problems in the remote communities, but that care should be taken so as not to overwhelm the service. The problem of petrol sniffing for example is largely a social problem and the responsibility for it should be shared across a range of services (for example, Aboriginal youth workers and vocational training schemes such as TAFE would be vital interventions). But through consultation with community representatives a viable role for mental health services could be made.

I hope that my work in Central Australia, and this dissertation, can be used as groundwork for further clinical development and research. The following are some suggestions for the future: 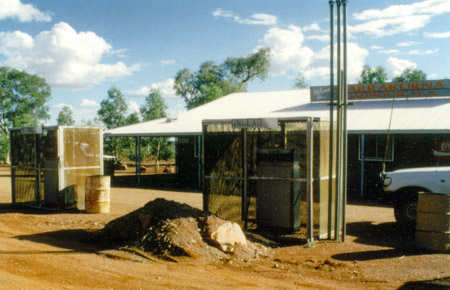