Remote psychiatry involves working with a wide variety of people, many of whom do not have any psychiatric training, some of whom are illiterate. It involves visiting communities where there may be a single nurse or no health staff at all, and yet there will be psychiatric patients there with quite serious mental illness. Flexibility and a willingness to delegate responsibility are essential skills for the remote area psychiatrist.

There is a heightened sense of interdependency between staff in remote settings and a sense of reciprocity. One is very reliant on others but can be helped greatly by them if one can be seen to be helpful and responsive to their needs – just doing ‘the work’ without thought to staff relations is not enough. McLaren (32) describes this well from his experiences in the Kimberley that ‘relations with staff go two ways’.

For most of my time in the senior registrar post the only other member of the Remote Mental Health Team was the RMHN. I worked very closely with her and soon realised it was essential to have this second team member when working in the remote communities. There was a need to share the driving, to divide the work up once in the community as often several things would need to happen simultaneously (reviewing files, taking background histories from clinic staff, making phone calls to other communities and Alice Springs). The RMHN would also conduct interviews by herself when gender sensitive issues arise.

Having a second colleague with mental health training was invaluable, in addition to which she had had more experience than I of working in remote communities and I was able to take advantage of her networking skills while offering her supervision and advice on medication, diagnosis and so on. It was important to recognise her greater autonomy than Psychiatric nurses that I had worked with in Sydney.

Most communities have at least one AHW, usually chosen from within the community. Many are illiterate and have rudimentary training in health and seldom have any mental health training. Their enthusiasm for their usual clinical duties (helping with dressings, finding patients and bringing them to the clinic, acting as translator) varies greatly as does the interest in mental health issues. On the whole though I have found them invaluable in my work in the following ways – as translators (even though they are not trained to translate, it is better than not having any translator when the patient’s English is poor), to validate my role to patients and families by introducing me to them, being a ‘cultural interpreter’ by explaining what is a culturally accepted belief and what isn’t, as guides to sensitive areas in interviews and explaining to me the ’emic’ views of mental illness.

As much as possible I would encourage their attendance at the interviews and tried to nurture their interest and knowledge of mental illness through informal education. Of initial concern to me was the issue of confidentiality and boundaries, as the AHW would often be a friend or relative of the patient. Fortunately, no one else would worry about this as within Aboriginal culture there is a different sense of privacy and boundaries. So, I learnt not to worry about this.

It is worthy of note that, as with most Aboriginal people, the AHWs are not very demonstrative and one’s visit may appear initially to be greeted with lack of interest by the AHWs. But in fact the opposite is usually true and there is a ‘bush telegraph’ (known in the Eastern states as the ‘Koori grapevine’). One quickly becomes well known throughout the communities – which can be good or bad. If perceived to be insensitive or incompetent this could quickly get around, so that good communication and establishing a warm and responsive demeanour is vital, even though the AHW may appear not to take note of what you are doing.

There are two AMHWs in the remote communities both at Yuendumu sharing a full time position. They are husband and wife, have a very traditional background, and are highly respected in their community. They were recruited and employed by their community council. They have had specific mental health training in Alice Springs and Darwin over the last 18 months but this represents the only formal education they have ever had.

They have done remarkably well to incorporate the western concepts of mental illness into their own traditional ones and are increasingly valuable as a vital link between the cultures. In my work at Yuendumu, I always involve them in the interviews. Their background histories of patients and their reports on patient’s progress, while communicated in a laconic and idiosyncratic way, are very accurate. For example, they asked me to see a young man who was ‘not sleeping much, doesn’t talk, not eating tucker, sit down all the time’. The man had a melancholic major depression. And if they say ‘he’s right’ I invariably know that that is the case.

In addition to being cultural and language interpreters and giving my role validity in the community, they are increasingly being involved in management, virtually as case managers, for example checking on compliance with tablets, aged care, taking tablets to people and so on.

While there have been teething problems, their role has been of great value and points towards ways of improving mental health service delivery to remote Aboriginal communities. 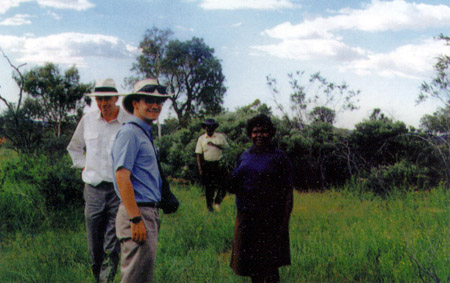 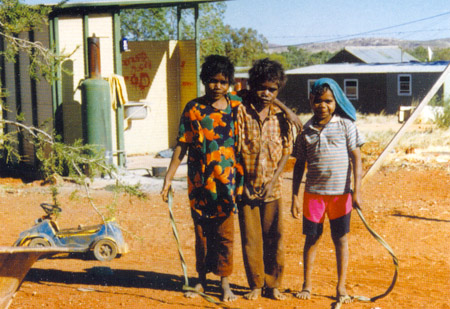 The traditional healer, or Ngungkari, is of central importance in Aboriginal society in central Australia. They are sought for help in all manner of physical, psychological and spiritual problems. They are usually paid a fee and people may travel long distances to see one that has a good reputation. Their treatment involves various magical techniques such as removing objects from people’s bodies, the use of culturally appropriate explanations for symptoms and the use of suggestion. Pharmacological intervention with bush medicine seems less common. I have had few direct interactions with Ngungkaris but have found it very beneficial to work in parallel with them. For example I will often ask a patient if they have seen a Ngungkari and perhaps recommend that they see one if they have not already done so. Even if the patient does not see their problems as relating to sorcery, the Ngungkari can be very useful to the patient. Jones (12) suggests that they can act in a supportive psychotherapy role. Their high standing within the Aboriginal community suggests that they are likely to provide the therapeutic benefits of making the patient feel understood.

Ngungkaris have never undermined any work that I have done with patients. They have never asked patients to choose between white fella and black fella help, and neither have I. The patients show a very pragmatic ability to accept both forms of intervention at the same time. I often explain that the ‘strongest medicine is when the white fella and black fella ways are used together’.

Members of the Community

I took advantage of a rare opportunity to gain trust and acceptance within the Hermannsburg community, when I was invited on a special men’s camp which included some important elders. Apart from myself, the other nonAboriginals to attend were the remote area physician and the male nurse from the Hermannsburg clinic. It was a chance to informally, on their terms, find out about the community’s concerns and what they wanted from a remote mental health service. We camped for three days on the banks of an isolated section of the beautiful Finke River, which was flowing strongly at the time (a rare event).

The activities included hunting and catching fish through constructing fish traps, and at night participating in sacred ceremonial men’s songs. The latter were performed with great solemnity and I was warned that their contents must not be divulged to women or children. I was able to pass on some information about my role and discuss mental illness. As Aboriginal people are often reserved it is hard to gauge how successful the camp was in terms of facilitating acceptance of the Remote Mental Health Team. But I gained a renewed sense of awe with Aboriginal spirituality and felt closer to the people.

Contact with senior colleagues is vitally important in remote psychiatry, especially as one is prone to feelings of isolation, disempowerment and at times doubts about one’s clinical abilities. I had regular weekly supervision in Alice Springs with Dr Proper Abusah (senior psychiatrist) where I was able to discuss the remote area cases. Helpful as this was, I still felt the need to have my clinical work assessed by a senior colleague in situ at the remote location. My external supervisors, Dr Tony Williams (two visits so far with one pending) and Dr Bruce Boman (one visit) have been able to carry out this role. It was invaluable to have them observe my interview technique, to support what I was doing in the remote area, to bounce my ideas off them and to receive feedback. Even though their experience in remote Aboriginal communities was limited, this did not detract from their value as we would share the dilemma of working in this novel setting and collaboratively explore new ways of working within the setting. Thus the relationship I had with the supervisors was somewhat different from that which I had been used to – that is, where the supervisor has had a great deal more experience in the particular area of work than myself.

As part of my supervision, I visited the Australian National University in Canberra to see Professor Scott Henderson, which enabled me to become acquainted with the methods of epidemiological research and in particular the current efforts at devising crosscultural cognitive assessment tools. Another supervisory visit to the Institute of Psychiatry in Sydney, acquainted me with the successful New South Wales training program for Aboriginal Mental Health Workers.