After many hours on the road, arrival at the community is likely to reveal a spread out collection of drab houses, most people outdoors either cooking on their porch or playing Australian Rules football, scores of squabbling camp dogs in various stages of ill health, corrugated iron shelters at the sorry camp, a car graveyard at the back, a few women digging for honey ants on the outskirts, the distant humming of an electric guitar, litter strewn about and all under a backdrop of striking purple mountain ranges. There is a council building, a store, a school and arts centre and the clinic. From the moment of arrival the clinical assessment process has begun: my every move is being observed and there is important information to be gained by the clinician.

I have found it useful to consciously slow down my speech, movements and driving speed in keeping with the pace of life in the communities. Rushing about gives the impression to the community that the Mental Health Team wish to leave as soon as possible – one of the main requests from communities is that visiting health care agencies should spend more time in the community. Lingering can allow time to engage in apparently idle chat, but which may actually give valuable information. For instance a courtesy visit to the Council office to inform them of our arrival in the community can yield information about significant recent events such as sorry or ceremonial business, any worsening of the petrol sniffing problem or whether there are any large meetings being held in the community that could disrupt our visit. Thus a social backdrop begins to develop.

I have found it especially useful to visit the local store for a refreshment or to refuel, in order to talk to the store owner who is often a fountain of information. There are few secrets in small communities and once the store-owner ascertains that we are the Remote Mental Health Team, he or she will impart their observations of several people whom they knew to be consumers of the service. At first this made me uncomfortable – I had no permission to use such informants from any of the patients and the concept of discussing a patient in a public place was anathema to me. However I began to see that I was wearing the hat of the Psychiatrist the moment I arrived and not just when I stepped into the clinic. Confidentiality was never breached as these unofficial informants were willing to give information without me responding in kind. I made a point of not talking to these informants within ear shot of others (the fuel bowser is the best spot).

The following are some examples of store owner accounts:

In keeping with the concept of wearing the psychiatrist’s hat the whole time, it is useful to consider that everyone is a patient until proven otherwise. Clinic staff or their spouses may be referred. A person that you might assume to be staff may not be, and may turn out to be one of the new referrals! This is because professional boundaries are less clear in the remote clinics such that responsible members of the community become unofficial nurses aids or clerks (including having contact with patient’s files). On one occasion my ignorance of this nearly jeopardised an assessment of a new referral: a white woman who was having lunch with all the staff of the clinic, during which various clinical matters were being discussed. When I joined the luncheon I had no idea that this woman was my next appointment, and I assumed she was a staff member. I asked the group ‘I believe one of my referrals is a white woman, is there any background…’ Fortunately the Remote Mental Health Nurse, Suellen, quickly kicked me under the table before I had done too much damage.

Generally though the arrival at the clinic is an opportunity to gather further clinical information:

However, a patient on long term depot neuroleptic who had no documented psychotic symptoms anywhere in her file (and the patient and family could not recall any past psychotic symptoms) was taken off her neuroleptics slowly. She promptly developed auditory hallucinations. Presumably, she must have had previous psychosis which had not been documented in the file (one possible reason is that people in these communities move frequently from place to place and one clinic may not be aware that there are records for the person elsewhere).

In another case, where an elderly Aboriginal woman was referred for disinhibition and sleep disturbance, my preliminary file review revealed a 1992 laboratory result for positive syphillis serology stuck inconspicuously at the back of the file. There was no record of any antibiotic treatment. I recommended repeat syphillis screen and eventually neurosyphillis was diagnosed and successfully treated. (note that syphillis exposure is extremely common in remote Central Australia).

Â Once file reviews are complete, it is necessary to give thought to which staff should be part of the interview. I found the following the optimal use of people’s resources (for reasons discussed more fully in the chapter on Working with People.):

Once the personnel have been selected then the location of the interview should be decided: the clinic or at patient’s home. I find the home setting the most valuable because:

Alternatively, the home interview does not offer much privacy for the patient as the extended family gather about. However the Western concept of privacy is focused on individual privacy and is very different to that of Aboriginal society. I am still learning about this, but find that most patients prefer family to be present. I endeavour to give choice to the patient by offering a clinic interview or to walk off some distance from the home to do the interview.

The home setting is likely to assault the senses of a white middle class urban trained clinician, challenging one’s objective neutrality. Litter, discarded household items lying about, mangy dogs sharing bed space with people on decaying mattresses, unclean and crude food preparation areas abound. The occupants of the household would often be attired in old unwashed clothes, suffer from scabies and skin infections and smell of body odour. Coping with this in a way which does not cause value judgements is discussed under Mental State Examination. 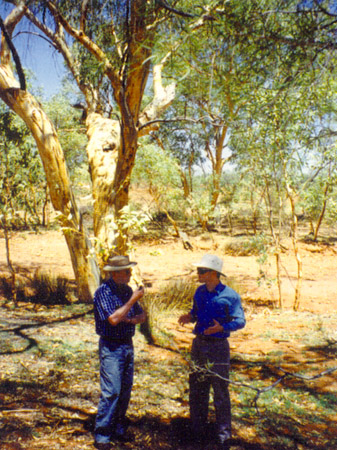 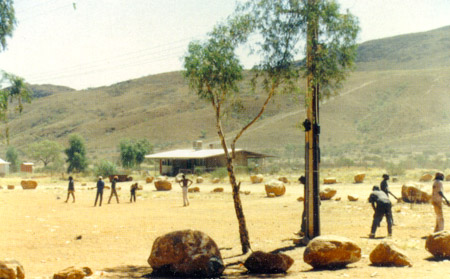