Having attempted the history taking and mental state examination in a careful and culturally appropriate way, and having tried to sort out the difference between psychotic phenomena, real precipitants, retrospective attributions and culturally accepted explanations of mental disorder, the process of formulation and diagnosis I used was the same as that used throughout my training.

The major syndromes (schizophrenia, major depression, bipolar disorder, dementia) were frequently present and usually easily recognised. Even with the obscuring effect of cultural beliefs (such as thought sharing, hallucinations and possession by spirits), schizophrenia and schizophreniform psychosis could be identified if there was good corroborative history of grossly disturbed behaviour and the community viewing the person as ‘rama’ or ‘wahronga’ (the words for madness in Pitjantjatjara and Warlpiri respectively). Even though it was hard to elicit the thought content in depressive states, the presence of the biological features of depression would indicate the diagnosis. As in Western culture there were atypical presentations of depression – somatization or shame states being examples – but careful collecting of history would usually show a depressive picture to emerge. Dementia was difficult to distinguish from chronic residual schizophrenia, requiring a good longitudinal history.

Of immense value was the discipline of sticking to a bio-psycho-social, predisposing precipitating-prolonging model of formulation. Families will often be blaming various events which ’caused’ the mental disturbance, (Cowdy describes this) and if there is any cultural content to the history, for example, ‘someone put a spell on him because he laughed at a funeral and ever since he has been hearing voices’ then non-Aboriginal staff can sometimes believe that ‘it is all cultural’ which tends to minimise the seriousness of the symptoms. In one case, a psychotic man was discharged because his disturbance was considered ‘cultural’ even though he had suicidal command auditory hallucinations. A careful formulation of the case showed that he had an acute psychotic episode with very serious symptomatology and that the culturally accepted explanations for his episode were a mixture of real precipitants and retrospective attributions. Ultimately the phenomenology decides the core syndrome and the multitude of explanations can be placed in perspective to give a wider understanding of how and why the individual was struck down at this point in time. Too often I came across the dichotomous Western style of thinking ‘is it a real psychosis or is it cultural’ (which reminded me of the body-mind problem), whereas it was more productive to think of the episode as being both real and cultural. Cultural factors play a part in mental disorders in Western cultures, just as they do within Aboriginal society, but this should not minimise the significance of the disorder. For example in a Western style psychiatric practice, a referral of a middle aged man recently retired with depressive symptoms may have a number of culturally accepted explanations of his illness: the loss of the work role robbed him of his main source of self esteem; he has a ‘chemical imbalance’; it runs in his family; its the male menopause; he has never been the same since his tennis elbow stopped him playing. These explanations may include precipitating, predisposing and prolonging factors or retrospective attributions which all may need attention in the management plan, but he has a depressive illness and there is no debate about whether it is ‘real or cultural’.

The work of Kleinman (37) was useful. He suggests that in cross-cultural work, the fourth dimension of ‘spiritual’ be added to the standard big-psycho-social in formulation. This has now been adopted by the NSW Institute of Psychiatry’s training programme for Aboriginal Mental Health Workers (personal communication from Dr Tony Williams, former director of the NSW Institute of Psychiatry).

Surprisingly most of the Aboriginal families I met could quite pragmatically accept a multifactorial explanation for a mental disturbance and accept multimodal management, for example medication for the biological side, to see a Ngungkari for the psychological spiritual side and to mobilise family supports for the social side.

The challenge was to be culturally attuned enough to pick out the more subtle precipitating, predisposing, prolonging psychosocial factors to have a well rounded understanding of each case. This is where the skills of the assessment process bear fruit.

I did not find Cawte’s (5) classification system of ‘traditional’ versus ‘transitional’ illnesses useful in the population that I was working with. Trying to match up the type of phenomenology with how traditional or otherwise the person’s background was impossible as they seemed fairly independent variables. A very traditional Aboriginal man described radio waves interfering with his vision and an apparently very Westernised Aboriginal woman described how the rainbow serpent had entered her body after she dug up a garden that she later found out was sacred snake dreaming country.

I found no exotic culture bound syndromes such as trance states, prolonged mutism or amock.

Organicity was often a likely factor in many presentations but could be difficult to confirm or exclude because of the difficulty of access to appropriate medical investigations. For example two cases of probable untreated epilepsy were referred with chronic psychosis, but the nearest EEG was in Darwin and the families did not want their relative to travel that far.

Brief psychosis with full resolution (often without treatment) and without clear precipitants has been described before, (Cowdy 33), and several cases were referred to me. I suspect use of petrol and/or skunkweed marijuana were precipitants but this was never confirmed absolutely.

There are many Aboriginal people who suffer significant long standing emotional distress who are difficult to diagnose on Axis i. For instance a traditional Aboriginal woman who has developed regressed and impulsive behaviours in the context of being infertile and having her younger sisters bearing children prolifically. Also several young men in Alice Springs who seem to have an empty life, multiple losses and self medicate with alcohol binges and present with impulsive self harm. These cases don’t often get referred to mental health, but the absence of an Axis i diagnosis should not preclude them from getting psychological help. The Axis iv diagnosis is more pertinent, especially when one familiarises oneself with the literature of Hunter ( 16,18) who outlines the multiple traumas and losses of acculturation. 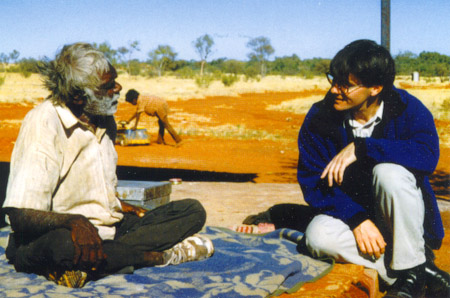 Figure 15. Talking to an Aboriginal elder on the concrete verandah