He entered the Faculty of Medicine at Sydney University the following year. Membership of the Sydney University Bush Walkers, enabled him to explore the wild places and scenic landscapes of Australia, New Zealand and New Guinea 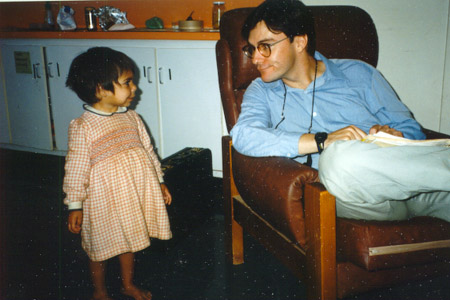 From October 1996 to the end of 1997, as Senior Registrar in Psychiatry in Alice Springs, he determined that his dissertation would explore “Psychiatric Assessment in Remote Aboriginal Communities”. Mark was awarded the Fellowship of the Royal Australian and New Zealand College of Psychiatrists in October 1997.

Following Mark’s death, memorial services were held at The Rozelle Hospital Sydney and The John Flynn Church, Alice Springs. At Alice Springs Hospital on 28 May 1999, after a service of dedication to the “Mark Sheldon Remote Mental Health Service”, his portrait and a plaque were fixed in a place of honor within the psychiatry building.

At the Annual Congress of the R.A.N.Z.C.P. In April 2000, the retiring president, Dr Janice Wilson, announced an annual award, “The Mark Sheldon Prize for Service in Indigenous Mental Health”, to be presented, for the first time, at the next congress 2001.