My motivation for leaving Sydney and working in Central Australia was to gain vastly different experience from the more standard training posts. I had some experience working cross-culturally with the Vietnamese, Greek and Portuguese communities of the inner west of Sydney. But this was little preparation for working with the indigenous people of my own country, where ironically I felt a wider cultural gap and a sense of awe on entering their lands. There is a palpable feeling of spirituality connected with the ancient landscape of deep purple mountains, scarlet ridges and soft yellow plains of desert oak and spinifex. I was suddenly conscious of my own Anglo Saxon cultural heritage feeling very new. It was an experience to enrich me not only professionally but also in my identity as an Australian.

The catchment area for my remote work is approximately 850,000 square kilometers (see Map 1Â – below ed), and includes parts of Western Australia and South Australia as well as most of the Northern Territory. The population of this area (excluding the urban populations of Tennant Creek and Alice Springs) is approximately 20,000 people, of whom 12,000 to 13,000 are indigenous people living in many small communities and outstations (see Table 1Â – below ed).Â Â The largest of the communities would be little over 1,000 people while some outstations may consist of a single extended family group. Within this remote indigenous population there is a great diversity of tribal and language groups (see Map 2Â – below ed). Some 93% of people speak an Aboriginal language at home and approximately 50% do not speak English or speak it poorly. (The urban Aboriginal population have higher rates of English proficiency and only 40% speak an Aboriginal language at home). 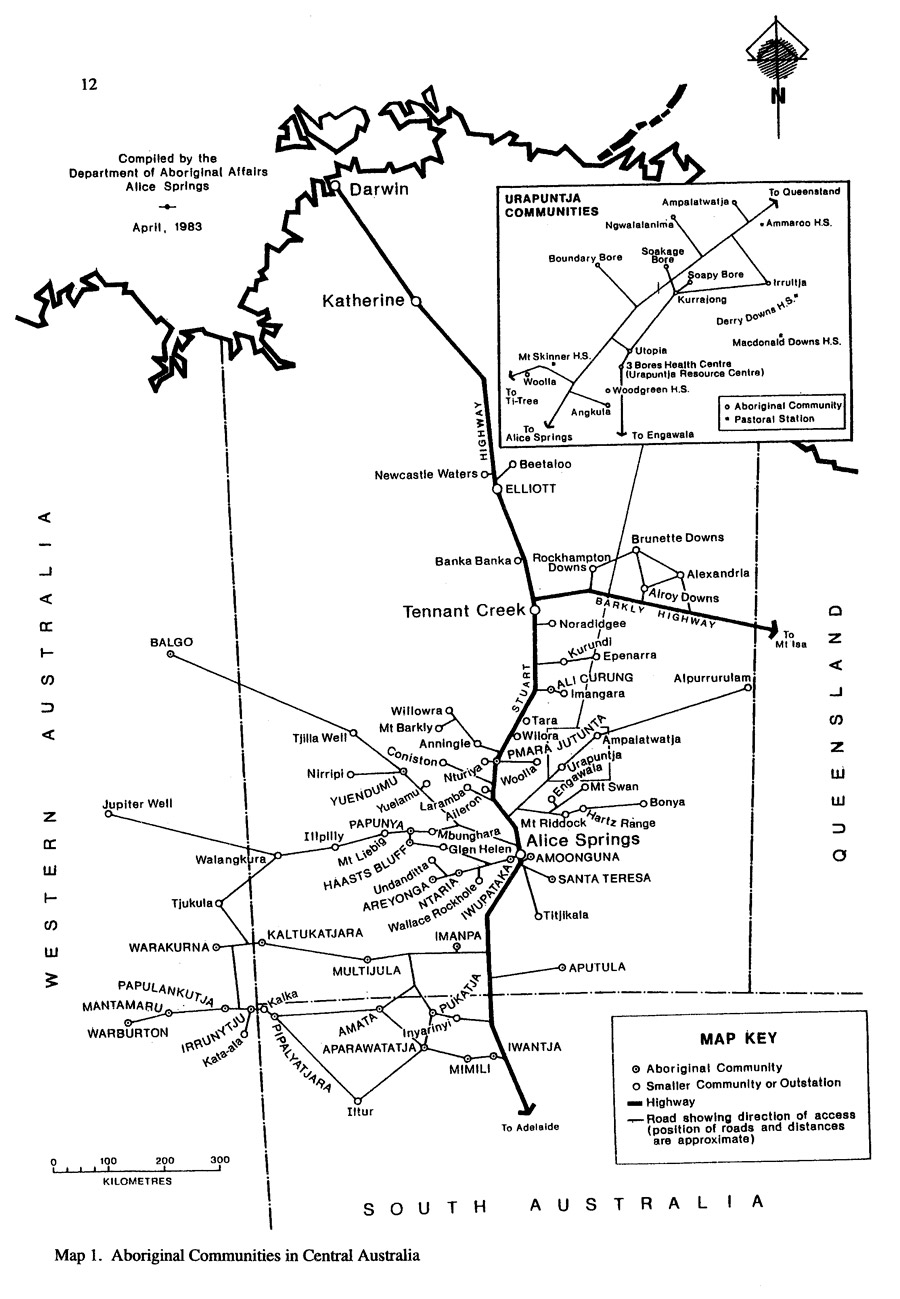 * Includes major communities in the Northern Territory. Does not include smaller communities, outstations or the communities of South Australia and Western Australia (Source: Alice Springs Remote Mental Health Services).

There is also a great diversity of personal histories within the population. Some people were brought up in traditional nomadic society and had first contact with white society as adults. (Personal communication from Dr David Scrimegeour, District Medical Officer for Kaltukatjara, indicates the last of such nomads to ‘come in’ was an extended family group of nine Pintubi people in 1984. There are reports of other small groups of nomads north of Yuendumu, where they are referred to as ‘the naked ones’). Others are very familiar with Western society and may have travelled widely overseas and had tertiary education. Still others are ‘stolen generation’ who have returned to recover their Aboriginal roots. Some of the older people can remember the massacres of Warlpiri people in 1928. The influence of missionaries may be strong in one area, while in other places the pastoral industry has had a strong influence. The latter tended to have less propensity for acculturation by providing a work role for young males and interfering less with the cultural traditions of the people – and it is noteworthy that petrol sniffing is most rampant in the former mission areas (outlined by Margaret Brady (1988) in her book ‘Heavy Metal’).

Each community has its own history: Missions and pastoral influences; peoples of different tribes may have been mixed together causing lack of cohesion; communities may have been created in a location away from the traditional lands of the people leading to a sense of translocation in the people; there may be internal conflicts between families especially where one family gains prominence in the local council; and there are different histories of substance related problems. Knowledge of these community histories is important to understand the social context in which one is performing the clinical work. 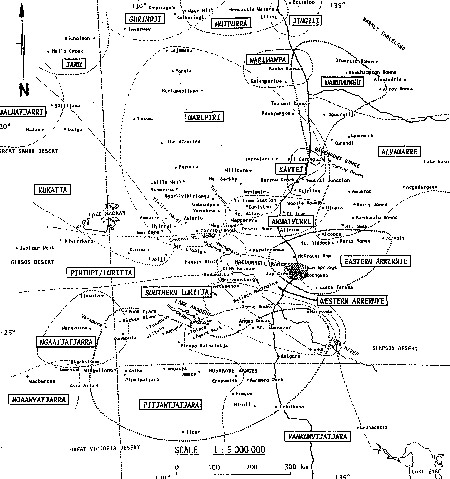 The communities are mostly on Aboriginal land under the NT Aboriginal Land Act and require a permit to enter. Each is run by a council consisting of local community members. Each has a clinic usually controlled and funded by NT Health (but some communities have community controlled clinics) equipped with the more common pharmaceutical supplies, basic medical and resuscitation equipment, files on all patients and staffed with non-Aboriginal nursing staff and Aboriginal Health Workers (AHW). A District Medical Officer (DMO) visits weekly to monthly via Royal Flying Doctor Service (RFDS) plane or four wheel drive and acts as a General Practitioner equivalent. The experience with substance related problems varies greatly from community to community. All are ‘dry’, not allowing any alcohol, but that does not stop ‘grog running’, especially in communities located near the Stuart Highway. Petrol sniffing has devastating cyclical epidemics in young people in some communities. Cannabis use is on the increase and of concern is the increased use of the more potent strain called ‘skunkweed’.

Cultural belief systems and traditions are maintained at different levels between communities and within them. It came as a surprise to me how much tradition is still present: with strong traditional kinship networks; hunting and collecting bush tucker; ceremonial ‘business’ and ‘sorry business’ (grieving rituals) dominating cultural life. Ceremonial business relates to the rites, rituals including initiation ceremonies, songs, paint designs, myths, sacred sites, and sanctioned behaviour that give form and meaning to Aboriginal life. These can all be summarised as the Dreamtime or ‘jukurrpa’ (Warlpiri) – a law established by mythological ancestors who, whilst roaming the land, gave meaning to Aboriginal society. The jukurrpa and these ancestors who gave Aboriginal people and nature, life. Women and men share responsibility for sustaining their society in accordance with the Dreamtime but do so in a complementary way. Men stress their creative power whilst women stress their roles as nurturers of the people and the land.

Given this social and cultural backdrop, where the people have such strong links to their lands, it can be seen that it is important to deliver health care as much as possible in the community. Of all the speciality services, Psychiatry is potentially the most mobile as it does not require endoscopes, xray machines or operating theatres. But in Central Australia a Remote Mental Health Service has been slow to develop: commencing in 1988 with a single psychiatrically trained nurse to cover the whole region except for the Barkly; the addition of two community funded Aboriginal Mental Health Workers at Yuendumu in 1995; the addition of the senior registrar in early 1996 where the registrar’s time was only 50% remote. In mid 1996 a proper filing system with a complete set of patient records, was developed by Suellen Cattanach. (Prior to this there was no written information in Alice Springs pertaining to remote area patients). Since my commencement in November 96 the service has grown to include a second psychiatrically trained registered nurse (with a second four wheel drive vehicle) and the senior registrar time has increased to 80% remote. This is still inadequate for a population of 20,000 according to the standards set by: Burvill (1) suggests a ratio of at least 1:10,000 psychiatrists to population;Â Ways ForwardÂ (2) suggests 2 per 500 of Aboriginal Mental Health Worker (AMHW) positions to population ratio; and the National Mental Health Reports (3) suggest 55 full time mental health positions per 100,000 population.

Stretching the resources over a wide area was one challenge. Another, was to adapt my clinical skills to the vastly different setting so as to provide a useful service to the remarkable people of the remote Aboriginal communities of Central Australia. It is this challenge which I will explore in this dissertation. 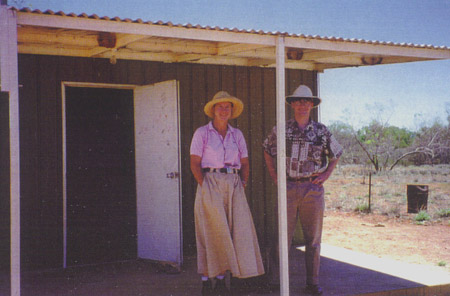 Â
Figure 1. Seullen Cattanach (RMHN) and myself at the rather modest clinic at Bonya 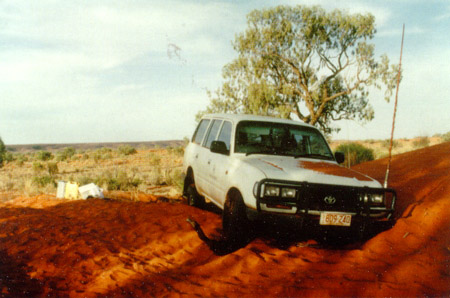 Figure 2. Bogged in soft sand, south of Maryvale. Logs placed under the tyres allow us to escape.