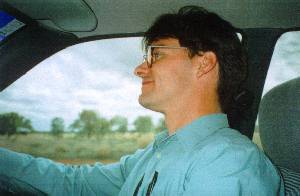 Mark did have some natural advantages, his love for the land which he shared with the Aboriginal people and his early education in the Northern Territory.