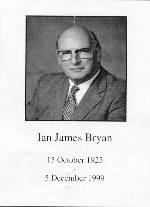 I well recall my first significant encounter with Bill Bryan – it would have been I969 – about lam on Saturday morning – Bill on the telephone ” I would like you to come to Marrickville Hospital – I have got a I9 old Uni. student with a fractured shaft of femur and I can’t feel any pulses in the leg” These were days before angiography or ultrasound- clinical acumen was required- judgement was essential – urgent action despite the hour and the inconvenience was demanded – and the young mans leg was saved.

This episode is just one of many -that this Master Surgeon orchestrated in his long and distinguished career as a Orthopaedic Surgeon. He led by example and gently but firmly ensured that his colleagues exhibited the same thorough and meticulous attention to their patients as he did.

Bill served for many years as Honorary orthopaedic surgeon to Marrickville Hospital and Western Suburbs Hospital and was a great supporter of the NSW Masonic Hospital at Ashfield.

Throughout his career he worked in a Honorary capacity; i.e. that is he received no remuneration at all for his Public Hospital work – and even after Medibank was introduced he declined on principle to accept remuneration for his enormous contribution to the welfare and safety of his Public Patients.

His commitment to what he regarded as true Hippocratic professionalism became an inspiration to his colleagues. He exhibited total loyalty and support to those individuals and organisations who stood against the enemies of the Profession he admired and respected.

Bill was deeply concerned with the deliberate and destructive attitudes of the Political parties to the independence of the profession and the virtues it enshrined for the public good.

He became a leading figure in the Australian Association of Surgeons and with John Dixon Hughes and others did much to sustain and encourage that organisation. He was awarded the JUSTIN FLEMMING GOLD MEDAL in recognition of his outstanding service to his organisation. John Harrison and Bruce Shepherd tell me he was equally influential in the Australian Society of Orthopaedic Surgeons.

In true Hippocratic tradition he taught his younger colleagues and revered those who had taught him. He frequently quoted Clem Callow and Doug Sturrock and Frank Mills as his great mentors.

He also showed us that it was possible to be an eminent surgeon and still maintain a robust family life as evidence by the extensive progeny here today! His family was his pride and joy.

Robert Louis Stevenson had a passage devoted to Doctors – ” There are men and classes of men that stand out above the common herd: the soldier. sailor. and the shepherd not infrequently; the artist rarely – rarer still the clergyman; physician almost as a rule. He is the flower ( such as it is ) of our civilisation; and when that stage of man is done with and only to be marvelled at in history, he will be thought to have shared as little as any in the defects of the period, and most notably exhibited the virtues of the race. Generosity he has, such as is possible to those whose practice an art. never to those who drive a trade: discretion, tested by a hundred secrets; tact, tried in a thousand embarrassments; and what are more important Herculean cheerfulness and courage. So that he brings air and cheer into the sick room. and often enough, though not so often as he wishes brings, healing.

I think Mr Stevenson had Bill Bryan in mind when he penned those words!

But above all these attributes Bill’s, loyalty and friendship remains supreme. He was always cheerful, supportive, loyal, encouraging and helpful, no favour was too great, no request ignored. His family has lost a wonderful husband, father and grandfather, the community has lost a great doctor and we have lost a dear friend who enriched all our lives.