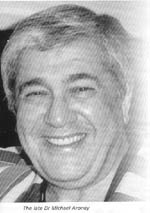 Michael was appointed a Visiting Medical Officer at Bankstown, Canterbury and Marrickville Hospitals, with rooms in Macquarie Street and Marrickville where he had a strong and large following in the Creek community.

As well as general surgery and trauma he had a special interest in surgical hydatid disease and later embraced laparoscopic techniques for cholecystectomy and more recently pioneering laparoscopic herniorrhaphy in Sydney.

When duty called Michael spent time in a war zone in Vietnam.

He was a most competent surgeon with acknowledged diagnostic and technical skills. Just as important, he was a kind, patient and caring doctor who always had time to be meticulous with the necessary detail in history taking for accurate diagnosis. All of his patients respected and loved him.

Politically his profile was high in the ‘Doctors Dispute’ in 1984, where he was outspoken on behalf of his colleagues and the Australian Association of Surgeons. He was Vice President of that organisation.

He had the integrity and courage during the ‘Doctors Dispute’ to do what was necessary to win the battle and was tireless in his endeavours. Sadly, this deprived him of public hospital access when the battle was over.

Michael Aroney loved people, life, his daughters and his grandchildren. He lived life to the full, generously enjoying the company of his many friends and colleagues at his table, or by a stream casting a fly for a trout. He was not critical of his fellow man and was never judgemental.

Michael was a very intelligent, well-read man who knew much about many things. He enjoyed his music, particularly jazz. He loved Greek history and was very knowledgeable about Ancient Greece. Touring with Michael in Greece was an experience.

Sadly, he was taken too young, just when he was enjoying his new life in medico-legal assessment, where again his opinion was keenly sought.

He died with great courage, patience and dignity and was optimistic about his survival even to the last.

Vale Michael Aroney, I am proud to have known you and been numbered among your many friends.

Dr Garry Scarf is a Consultant Surgeon in Sydney.